I knew I wanted to keep most of the design for the nursery pretty simple.  I didn't want it to be totally themed out but we did want a strong influence of Kenya in the room.  Kenya holds a very special place in Hubs and my hearts since we went on a short term mission trip there over a year ago.  While we were in Kenya we were able to go on a real life African Safari.  I never thought I'd be able to check that one off the bucket list!  Hubs got some AMAZING pictures of the animals and we decided to use some of those in simple IKEA Ribba frames in the room. We printed the pictures out at Wolf Camera and found free online coupon codes so we ended up not paying a dime!  The Ribba Frames set us back about $40 ($9.99 a piece).  $42 if you want to add in the cinnamon rolls we ate while we were there...
I was putting the photos we printed into the frames and looked at how I was supposed to do assembly for hanging them.  That's when I discovered why a big, matted frame was sold for $9.99.  There were wires and clips and a feeling of getting the things in a straight level line would be impossible.  WRONG-O!  Thanks to blogs, mainly thanks to Kelly at View Along the Way.  She has a jammin' tutorial on how to hang these bad boys.
You can check it out here.
So once we figured out how to make sure all the frames were hung at the same level we wanted an easy way to space them.  We looked around the room and low and behold we found a tag from a pair of baby shorts that was just right.  Ghetto or Genius?  I'm going to go with genius!  My job was to hold the tag up there while Hubs leveled and made the mark for the hole. 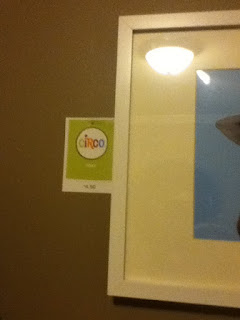 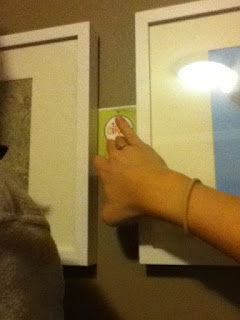 It really did not take very long at all to hang them.  The most time was spent assembling the frames and making sure the photo was in the frame straight. 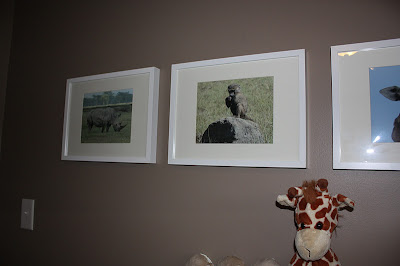 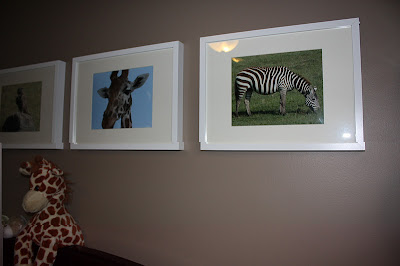 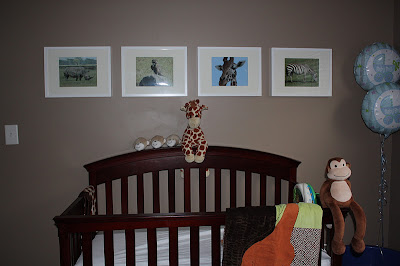 We have a few more things left to do before the nursery will be completely done.  One of which is hanging a ceiling fan with lights because right now the lighting in this room is awful (can ya tell by the pics...I think so!)